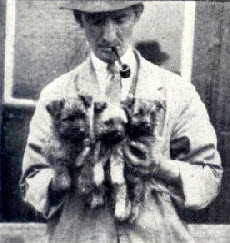 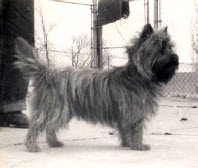 How I first started in Cairns by W.N. Bradshaw esq.

In 1944 when I was at a show in Burnley, I saw a young boy with a nice looking puppy. At the time I was Secretary of Accrington Canine Society and asked the boy if he would show the Cairn at our show. The boy then told me the puppy was for sale , price £5. I got a coat comb, brush, and lead and gave him this and £2 ( which was all I had on me that day) and collected the puppy the next day.

The first show I took it to was the Blackburn Sporting Terrier. I entered it in six classes and it was last in each if them. Afterwards I told the judge that he had lost his eye for a good dog as that one was good and was entered for Cruft's. I couldn’t go to Crufts because of work so asked a old lady who used to show Pekinese to take it. She had never handled a Cairn, and asked how to prepare it. I told her to spit on her hands then rub them all over its head furnishings, and present it in the ring. It won 2nd and 3rd at Crufts under Baroness Burton, he was Anthorn Magnet and did a lot of winning.

A doctor had brought a Scottie from me but sometime later it had to be put to sleep. His children were very upset about this and I told them they could have Anthorn Magnet at no cost to them but I wanted to show him and he would have to be returned after the war. This was accepted. Unfortunately when taken for a walk by a servant, who let it off the lead, it ran under a passing car and was killed. The Doctors wife was so upset she brought me another cairn puppy from an advert in the papers. She brought it down to the ambulance station were I was working, I told her it would do and not to worry anymore.

Right from the start I have used my eyes i.e.. recognising a good puppy. This is very important. To my mind, if people would use their eyes instead of their ears, they would quickly find out the difference between a good dog and a bad one. To-day, they seem to be fond of listening to anyone pulling various dogs to pieces. A good dog will withstand criticism, a bad dog criticises itself. If you are really interested in the good of the breed, listen to what people say, but ONLY BELIEVE WHAT YOUR EYES TELL YOU. Find out for yourself.

In total, I think I have made up 42 champions. I have always been lucky. People have used my dogs and brought back puppies for me to see, and I have brought from them when I have seen something good.

I have’nt made a lot of money out of dogs, but, by Jove, I have enjoyed ALL OF THEM.

I brought another bitch and named her Redletter My Choice. I think I was at the first Cairn Terrier Association show after the war at Skipton, where I spoke to Miss Bengough about using one of her dogs for stud. She had two dogs there, Bonfire, and McJoe of Twobees. McJoe had already won 4 or 5 CC’s and Bonfire had always been second to him. Miss Bengough wanted me to use McJoe on the bitch, but I liked Bonfire so much I persuaded her to let me use him. I was very fortunate, when the litter matured, there was a very, very nice dog in it. He eventually became Ch Redletter McJoe.

When McJoe was about 9 months old, a number of people wanted to use him at stud. I was at a show in Liverpool and met Colonel Whitehead. He told me he understood that a number of people had booked McJoe for stud. He suggested that if I let this happen it would spoil his chances of becoming a champion, as the dog would spend his time looking for bitches instead of concentrating on the job in hand. He went on to suggest that a dog should be proven at the age of ten or eleven months and then rested until he was more mature.

This was a great thing about Colonel Whitehead. He was a very astute man and one of the few people that gave me a lot of help, guidance, and was always worth listening to. If I remember rightly, I think that was the first occasion I had received any guidance, and subsequent events have proven the wisdom of his suggestions.

Colonel Whitehead suggested, on one occasion, that there were a number of people in the breed that I should never allow to use any of my stud dogs. A man named Craig, who was not one of these people, had a beautiful bitch and wished to use Ch Redletter McJoe at stud. I said there would be no stud fee as I would like a puppy from the litter. Sometime later he brought the bitch for mating, but refused my terms. He paid the stud fee and agreed to sell me a dog puppy for a fee.

Months after this, I was at Bolton Show when Mr Craig appeared with a puppy under his coat. He explained that this was the puppy I wanted. I was a bit taken aback and asked to see it. We stood it on a bale of straw which we had at shows in those days. I took one look at it and told him that it would do for me. How much do you want for it? £10 he said. That puppy became Ch Redletter McMurran. Do you see how easy it would have been to miss the opportunity. Someone else could have brought it. I have already said I have been lucky in the breed. Through McMurran I did a fair bit of winning, and eventually broke the record for the highest number of CC’s gained by a dog in the breed.

Reproduced here with their kind permission. 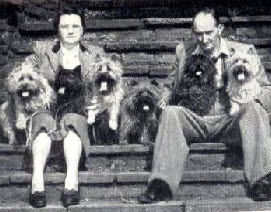 When the war was over I persuaded the lady that the bitch should have a litter and found a suitable dog for it ( Stanholmes Dusty Prince - stud fee 50 pence ). The bitch whelped two puppies, a dog , which died, and a bitch. The bitch puppy I kept and showed. She became my first Champion, Ch Redletter Magnet. How strange things are to obtain a puppy in this way. It was lucky. This was not the only lucky event what happened. I was at a show and one of the top judges was officiating. A bitch I liked was thrown out of her class, and I commented to the owner that I thought she was rather unlucky. He asked me if I was interested in buying her and confirmed that she was for sale for £25 as far as I can remember. I brought the bitch and it eventually became Ch Redletter Mona of Cambwell.. She bred me another Champion when mated to McMurran, that was Ch Redletter Monalise.

On another occasion I was in Scotland watching the judging at a Championship show. I saw a lady with a nice looking bitch unplaced in its class and again I opened my big mouth. I told her I liked her Bitch. She offered to sell her for £35 which I agreed to pay. This was the highest sum I have ever paid for a bitch. She eventually became Ch Redletter Penny of Blarneystone. Unfortunately, she had a very bad haemorrhage when whelping and died. You can see that it isn’t always the ones you think you are lucky with when something like that happens.

Always remember, if you have a dog with a good neck, shoulders well laid back, and a good front, the back end must be right. Don’t bother as much about heads as this is only one part of a dog. Good furnishings can make the head look good, but if you don’t have the essentials I have mentioned, no amount of hair can hide the differences. Some of you will achieve success, may be as much as or more than I have. Remember success is waiting for you sometime, but don’t get carried away with the idea that all your dogs are the “swans”. Occasionally you will have an ugly duckling that comes good, but not very often. You should look for the nice looking puppy at the beginning. 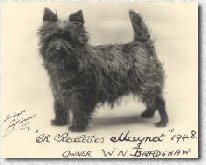