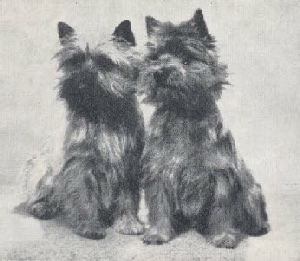 We often hear it said that Cairns are not “ like they used to be”. As I look through my Scrap Book, which goes back to 1912, I am not really bothered about it because I am sure they never where.

Although I did not know the breed at that time, there were differences then as now. Long legged ones, to walk and climb and worry Otters among the rocks. Others with wider fronts, low to ground and digging feet to bolt Fox or Badger.

They were game, sporting and intelligent. Loyal companions, with an air of understanding one, which gives them the expression I can only describe as “ Cairnishness “

For years after I owned and bred a nice litter, I went to all the shows which I could manage, to make up my mind what I liked best according to my interpretation of the standard, and it a was a long time before I saw the results of my study in the show ring awards.

As the Cairn became better known certain definite improvements were made from the show point of view, although Judges reports of the late 1930’s were often far from complimentary.

More attention was paid to the “ Terrier “ qualities, one of the essentials of the breed. Ears became smaller, fronts straighter, feet thicker and movement more definite. Necks and shoulders improved and coats were groomed. The Cairn being better presented than in the older times while remaining unspoilt by over trimming or over handling in the ring.

It must be said that our breed is first a “ Cairn “, he has a characteristic head with wide skull, deep but not long muzzle, straight front, thick pads and strong pasterns. And should move with power in his hind-quarters. His especial charm is his character and expression, keen, enquiring, understanding, but with the far away look, as though seeing across the hills of his “ AIN COUNTREE “. He gives loyalty to his friends who love him wherever they are.

They soon became one of the most popular of the Terriers, and for a number of years now they have headed the list of terrier entries at Championship Shows. Despite this popularity they have retained their sporting characteristics.

Article first printed in the Cairn Terrier Association Yearbook 1966 and reproduced here with their kind permission. 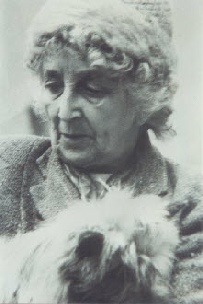 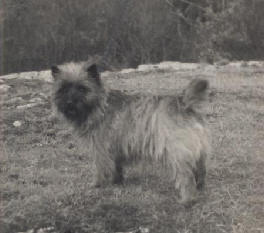 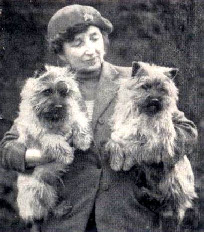 A few thoughts on Cairn Terriers then and now