Forty-one years ago, my sister and I went to our first dog show with our own Cairns. We, and our friends, were confident that we would go B.I.S. And as far as I can remember we won a Res. card in a Novice class! In those days our breed was little known locally, and no classes were provided, so we were competing with all the other terriers. Very quickly the Cairn gained popularity and local Open shows put on classes for us. These were well supported and very soon the Members Shows followed suit. At these we were more successful and Red Cards and sometimes silver trophies were proudly brought home. 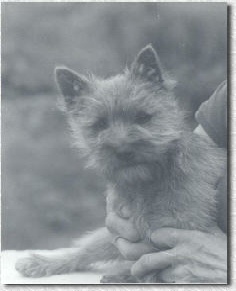 Having spent a year at the Dochfour Kennels of Baroness Burton we were confident that we knew everything when we started on our own, and then proceeded to learn the hard way. The stud dog we were so sure would suit our bitch threw bad mouths or slack ears - or his progeny would not show. The bitch we were so sure would give us a “flier” who whelped in the night and was in trouble and the Vet miles away. No transport. No telephone after 8.00pm in this district - No Ceasareans in those days, or if attempted you lost you bitch. The ones we sold as pets and wished we had not. Then, at last, we produced our “swan” and distemper came like a black cloud and our hopes were dashed again. However, dog breeders are tough and never give up.

With great difficulty we managed to buy several bitches. None of the well-known breeders would part with anything they had managed to keep through those war years - and who could blame them? So we were in business again, with many faults we would have to breed out - then HARD PAD struck and we lost half of what we had brought. One bitch, Dazzle of Darwencote, survived. Fortunately she was the best and on her we pinned our hopes. She was sound and her temperament was right, and above all she had TYPE.

She was sent to Ch. McJoe Of Twobees, and to our delight produced four daughters and a son. Now, we thought, we shall have something for the ring. A visit to a local show brought back gastro enteritis which swept round the Kennel in a couple of days like the plague. Dazzle fell a victim, and all four of her daughters succumbed and she was left with her small son. He was never a show specimen, but our faith in our breeding plan had been fulfilled. From that little dog and from Dazzle, by careful selection, are four of of the five Champions in the Kennel today descended. 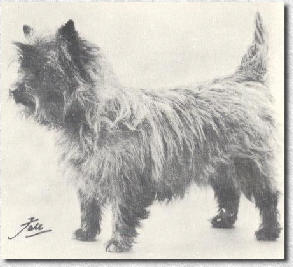 Ch Felshott Bryany being our first Champion, seven generations in direct tail female line from Dazzle, and the latter’s son by McJoe played an important part in her pedigree. Mr Bradshaw gave Bryany her first CC, Mrs Nan McKay her second, and Col Whitehead - bless him - her third and her title. Two of Bryany’s daughters have since become Champions, but inevitably our first Champion must be our greatest source of satisfaction. 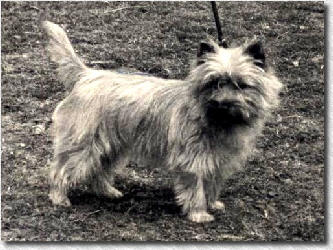 There are people who have the good fortune to breed a Champion in their first litter - but have they missed something? I know I come away feeling that these forty - one years have been well worth while and the disappointments and the heartaches forgotten.

and reproduced here with their kind permission.

When war came the dogs had to go - the older ones alas to their happy hunting grounds, - the young ones farmed out. We never dreamed that six years would pass before we could start again. Our young ones then too old to breed from and our strain was lost. 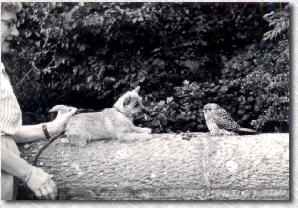