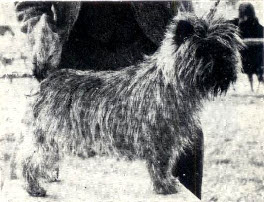 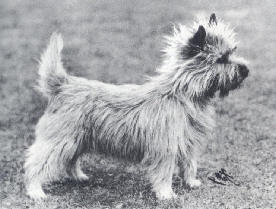 “What Walter did was take the breed by the scruff of the neck, shake out the stuffiness and short back, let daylight underneath, and do away with “bossy” shoulders and “Chippendale” fronts”-- Quote from the Hall sisters of Felshott Kennels.

In the period 1948 to 1981 Redletter Cairns achieved and made every record in the breed. Forty two champions were made up. Top of the dog winners was Ch Redletter McMurran ( the breed record holder until 1991) who won 26 C.C.s - and the bitch, Ch Redletter Moonraker with 22 C.C.s, who held the bitch record

Walter Bradshaw was the first owner to win Best in Show at All Breeds U.K. Championship Shows with a Cairn. He did this twice with Ch Redletter McMurran at Paignton 1955, and Ch Redletter Sea Spirit at Manchester 1968.

Walter followed his own advice, “Use your eyes”. He was gifted with eyes connected to memory so acute that they would make cameras linked to a computer come second in instant recall! He knew every dog he had ever seen. If a dog got off its bench - he always knew to whom it belonged.

His perception was remarkable. He never needed more than about six words to cut through the verbiage to get to the root of a problem. Some found this disconcerting, but quickly learned to realise the quality of his assessments and he was a highly respected Committeeman of the Kennel Club, many Canine societies, and the C.T.C. where he served on the committee for 23 years. He had a great affection for the C.T.A.( which he considered his local club) where he held every office. He was also a great supporter and adviser to the Midland Cairn Terrier Club in it’s formation in the early 1980’s.

Walter tried to help everyone, particularly youngsters and newcomers. Probably Northerners understood his laconic use of words better than most. “ This ‘un ull never do owt “, - and it wouldn’t. “ Very nice “ - meant no outstanding fault - but no outstanding feature either! “ Not a bad ‘un” translated Good! “It ‘ull do” - an outstanding specimen - “ It will do for me” - absolutely the tops!

Walter Bradshaw was not born into a privileged background but grew up in the north of England at a time of hardship and poverty. He went to work at the age of 12, his trade was block making in the cotton industry. During the first world war he served as a stretcher bearer, he said he was too slight for any other job! When the war ended he married Rose. Work during the twenties and thirties was difficult to find and for a time he had to go to Ireland to ply his trade.

He was a  popular judge, awarding CCs in 26 breeds, in all of which he had a closer interest than most all-rounder judges. In many of them he had helped form clubs and had attended breed functions. He had traveled all over the country judging since before the second world war at all types of shows. He was also a popular judge abroad, going to America and Australia as well as Europe. He twice judged the terrier group at Cruft's, in 1970 and 1982, and the gundog group in 1978.

At this time his great interest was in dogs. For obvious reasons he did not own many at any one time, but he particularly liked the terrier breeds, especially Fox terriers and Scottish Terriers, and Flat coated Retrievers. This latter breed gave him the prefix Redletter, the name of his first show dog.

So it was not until the second world war was over did the Redletter Cairns come to prominence. In 1948 he made up his first Champion, Ch Redletter Magnet. Thereafter Champions came thick and fast and he was a dominant breeder/ exhibitor for over four decades. His success meant that the influence of his dogs is worldwide and rare today is a cairn pedigree without a Redletter ancestor!

with 3 Champion Cairns in direct line, Ch Bonfire of Twobees, 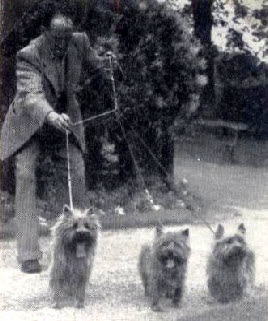 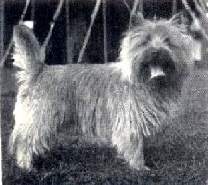 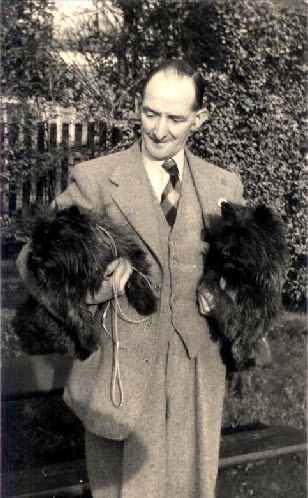 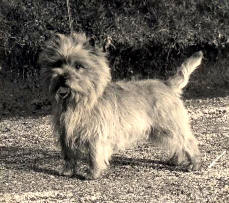 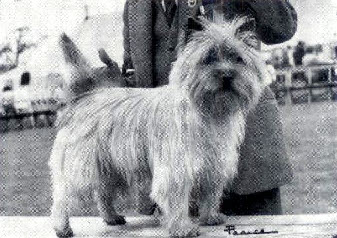 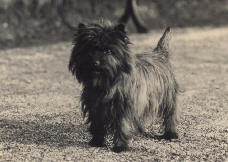 How I started in Cairns